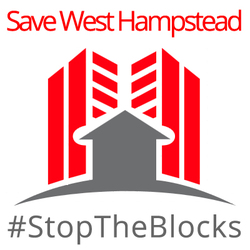 West Hampstead in the London Borough of Camden is, like many other boroughs in the city, facing unprecedented levels of ‘redevelopment’ – indeed over-intensive over-development – at the behest of councils operating in tandem with private developers. In rather too many cases, long-standing communities are being destroyed and local public assets being sold-off and handed over to private developers to do with largely as they choose, irrespective of the direct tangible benefits to existing residents, in a single-minded race to build housing and cleverly-named “affordable housing” that is beyond the means of the majority of workers.

Camden is no different, having already seen the historic Camden Lock Market and huge swathes of light industrial space in King’s Cross and elsewhere sold-off. West Hampstead, with its multiple railway network interchange and widely touted “village feel” is also the focus of a series of large-scale developments approved by the council in spite of their impact on residents, their businesses and livelihoods and the area’s heritage.

Today, the Save West Hampstead “Stop the Blocks!” Campaign publishes its open letter to Camden Council and A2 Dominion, the council’s latest preferred bidder for a site at 156 West End Lane, in an attempt to shine a light on the dubious operation of the council, its representatives and the way in which it seems happy to ignore and overturn its own planning policies in bids to secure short-term profits from the rapid disposal of public assets against the wishes of the very people and communities the council is meant serve.

For further information about the campaign, please see the Save West Hampstead “Stop the Blocks!” website at savewesthampstead.wordpress.com, follow us on Twitter, or email us directly at SaveWestHampstead@gmail.com.

Open Letter to Camden Council & A2DominionFundamental flaws and failings in the plans to redevelop 156 West End LaneBalancing the pressures of growth with the sustainability of communities is one of the biggest pressures we face today. In our borough of Camden, as across London, we must plan for tomorrow, provide for today, and not lose sight of the past and our heritage.

The public emergence of redevelopment proposals for 156 West End Lane in West Hampstead (the Travis Perkins site) has fundamentally called into question how our elected representatives at Camden Council are trying to tackle this delicate balancing act. The ill-considered plans unveiling themselves before residents in a fast-paced one-horse race to secure the site and planning permission have spurred the formation of our community action group, Save West Hampstead “Stop the Blocks!”, and people across our community are deeply concerned and disturbed by the proposals.

Let us be clear – we do not wish to stand in the way of house-building – we want to see more done to provide high-quality and actually affordable homes in our community and we want our elected representatives – and the officers who advise them – to take the lead.

What we do not want is for inappropriate developments to be foisted upon us by arbitrary developers, with or without consultation.

We do not want our Council and its representatives to sell-off public assets to fund their out of control spending plans or financial mismanagements.

We do not want our Council to have the unaccountable ability to selectively set-aside policies they have established to protect and support borough-wide planning. Likewise entities like Travis Perkins, a local employer and server of local retail and tradesman in the community for nearly four decades, should not be held hostage to the vagaries of an inconsistent planning department simply by virtue of the fact that the land they sit on is not owned privately, but by the Council who may deem it desirable to grant themselves and their preferred developer of the moment carte blanche planning consent.

There are a number of critical questions that we want to see answered before the fate of the area is sealed without the application of appropriate process and due diligence:
​
We are a passionate group of concerned residents that have learned from Camden's mistakes of the near past and are demanding better long-term solutions. Today, we are around 100 people and support for our organisation locally and across the borough is growing faster than we could have hoped. We echo sentiments that ring true across Camden and London, which are seeing an unprecedented growth in grass-roots community groups formed to oppose ill-considered and inappropriate 'developments' that do not meet the needs of local communities and which are driven by the short term cash-flow concerns of councils and long-term profit motives of developers aiming to maximise returns from any piece of land they are allowed by short-sighted councils to occupy. Our mission is to ensure proper scrutiny is applied both to the management of public assets and to the people we elect to represent us and provide stewardship for our community.

The proposals for 156 West End Lane contravene Camden's planning policies and threaten to blight a heritage conservation area. Worse, they offer nothing more than the worst possible deal for the taxpayer. Attempts to whitewash the legitimacy of the Council's approach on the basis the scheme will deliver new housing – which is necessary but not an end in itself – are disingenuous.

We are calling for a better solution. We are calling for Camden Council to act as considerate and caring custodians of our community, not cash-chasing property speculators acting fast and loose with public assets that belong to everyone and could be used to benefit the whole community, rather than a private developer and the incumbent Council administration. Councillors and elected representatives are transient, but the communities they leave behind are forced to live with their legacies.

There are better ways than the proposals outlined and these need to be explored fully before a decision that will negatively impact the community, the environment and the general amenity of residents while simultaneously failing to provide the type of housing that is so desperately needed. Other options need to be explored and the sooner Camden Council changes course, the better for all concerned in the long term.

On behalf of the Save West Hampstead "Stop the Blocks!" Campaign